Review Reblog – I’m taking things a little slower here at the moment for a range of reasons but I thought this would be a very good time to revisit and try to catch up with some of the reviews and releases I’ve missed over the past years. What better way than to start with this release and the Yeah I Know It Sucks review, both make me smile : ) 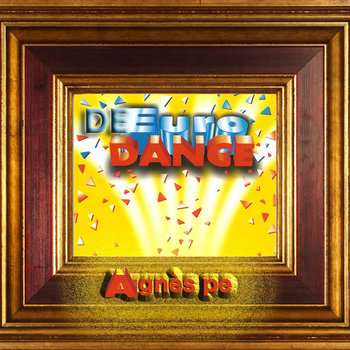 De Eurodance. What is it, and how does it sound or simply goes?
Anges Pe is the brave Professional professor who had spent a great amount of time in researching this non favorable subject. She has traveled all over Europe, visiting every country, absorbing every form of culture and took as many first hand examples of ‘De Eurodance’ No stone has been unturned, no corner untouched as Agnes Pe simply wanted to know the bottom and the finest essence of De Eurodance. From Greek Hoompa Loompa parties, wooden shoe circle dances in the Netherlands, to Italian folklore fetish euro festivals and Eurozone neopolk gypsy’s..
Everything she has seen, heard, lived and noted down for the sake of De Eurodance.

Her research results have been widely published in over popular new wave children books, and for the illiterate…

via Sofía Bertomeu – And you, In which movie are you playing? — Yeah I Know It Sucks

As usual, YIKIS have a wonderful off kilter review to go with this release : )

“There’s a certain intensity to it, gazing into something too vast to apprehend, but small enough to take in, ”
This review says it all, so nothing to add except its’ sparseness seems to reflect my present mood – undercurents of unease or it could be the falling rain against the window.

Where last year’s Kontrapoetik was furious and direct, Epistasis is passionate and exploratory, structured like an ouroboros that in completing its form comes to both an end and a beginning. One depends on the other, the circularity of this mythical figure not so much an instance of unmoving things but of action and reaction, chains of effects whose relationships are anything but linear.

The “Interlocked Cycles” – the first and last tracks in the album – are thus the setup and the finale, a loop in which every instrument and every note aims for the subtle dissolution of the straight musical line. Like the snow in the cover, an almost White on White composition, the players lay down sheet after sheet of tones that, even when conforming clearly cut sequences, feels like staring into the sky. There’s a certain intensity to it, gazing into something too vast to apprehend, but…

Thanks to Toneshift for leading me to tonight’s listening. Read the review here –

“My childhood was deep blue and foamy,” writes Serbian composer Manja Ristić. Her memories of Korčula Island are pristine. As she recalls the town streets “positioned in the shape of a fish bone,” and the “natural air conditioning of the Adriatic winds,” one can imagine long, carefree days and nights spent by the sea. But when […]

via Manja Ristić ~ The Black Isle — a closer listen

“In her changed environment, despite sonic pollution, she is still able to find an oasis.” (Richard Allen)

Maybe it’s because I recognise the methods in creating The Black Isle, this is a release that I loved from first listening. Thanks to A Closer Listen it would have otherwise escaped me.

Two beautiful releases for tonight beginning with this…

has graced the virtual pages of Aural Aggravation on a number of occasions, and has been on my radar for a while. Here, she comprises one half of newly-founded Snowdrops, a France-based keyboard duo formed with Mathieu Gabry.

With Yann Tiersen, Tindersticks, Foudre!… as resumé namedrops, the pair have pedigree. Snowdrops is a soundtrack work, composed for Phuttiphong Aroonpheng’s film of the same name, which has won several awards including Best Film in the Orizzonti section at the Venice Film Festival.

The press release explains that ‘the Thai film trains a poetic look at the void of humanity through the story of two men, a Thai fisherman with peroxide blonde hair and a nameless stranger stuck in a foreign land and supposed to be a Rohingya of Myanmar, whose continuing persecution is constituting one of the biggest human rights scandals of our time’. And…

via Meg Bowles: Evensong: Canticles for the Earth — starsendradio