Some of you will know how I’ve championed this album in the past and so I’m glad to be able to reblog this here : ))
Courtesy to Obscure Music Daily. 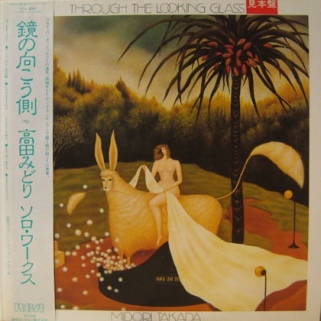 Through The Looking Glass is an album by Midori Takada that was released in 1983 on the label RCA. This album is ambient.

This album has some of my favorite ambient tracks on it. Beautiful serene melodies, slow warm drones, birds, windchimes, spastic xylophone(?) loops, and so on. The album utilizes lots of traditional and non-electronic instruments which gives it an awesome sound. Lots of wood winds and various minimalist percussions creating beautiful ambiances perfect for laying in a field on some alien planet watching the clouds. Half of the tracks are more serene and some are more tribal, especially with the final track “Catastrophe Σ” which is tribal ambient (a subgenre that focuses on rhythmic drumming instead of melodies) . My favorite tracks are the first, Mr. Henri Rousseau’s Dream, and the third, Trompe-L’oeil; the more serene / calm / melody driven ones.

Listen to it here